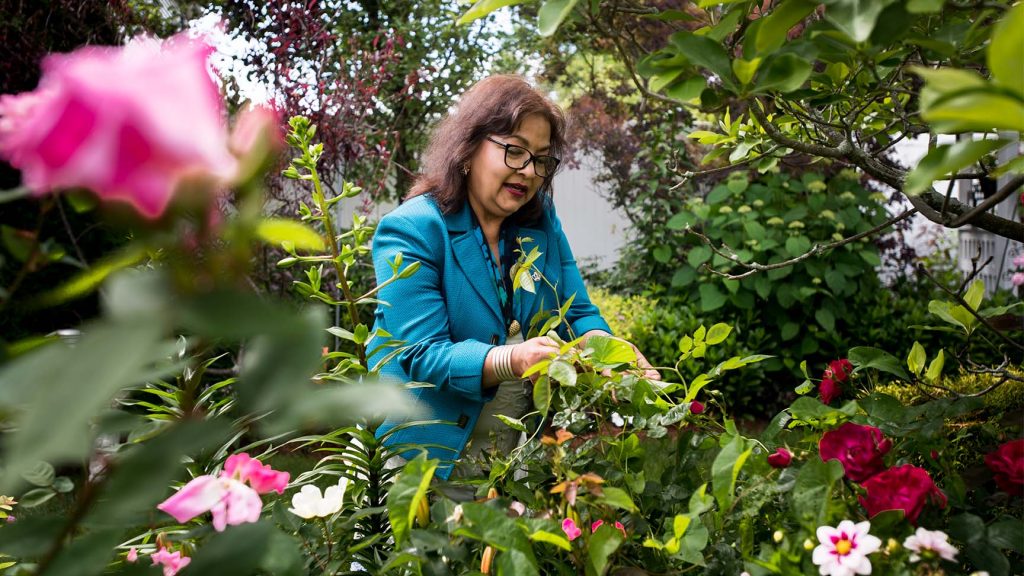 It began with a packet of seeds. Growing up in Dhaka, Bangladesh, Nasim Parveen was mesmerized by the lush flowers she saw growing in neighbors’ gardens. As a second grader, she begged her father for a garden of their own, but he rebuffed her, saying, “No, this is dirty stuff.” After many entreaties on her part, he finally relented and bought her a packet of seeds. When she returned from school one day to see that those seeds had produced plants with purple blossoms, she was smitten.

“I said, ‘Oh, this is something,” Parveen recalls. Thus began her lifelong passion for plants and gardening. A librarian at BU’s Stone Science Library, Parveen (Wheelock’83,’86) has plied her green thumb from one continent to another. And for the past 17 years, her passion project has been her quarter-acre backyard garden at her West Roxbury home. When she bought the house, it was still under construction. The lot had previously been used by the city of Boston to store salt and sand in winter and when she bought it, there wasn’t a tree or shrub anywhere in sight. But, she says, she instantly knew “this is the place I have to have.” At the time, she was going through a divorce and both of her children were attending Boston Latin School. To keep them enrolled there, she had to live in the city limits. But she immediately saw the numerous possibilities the blank canvas of the empty backyard provided.