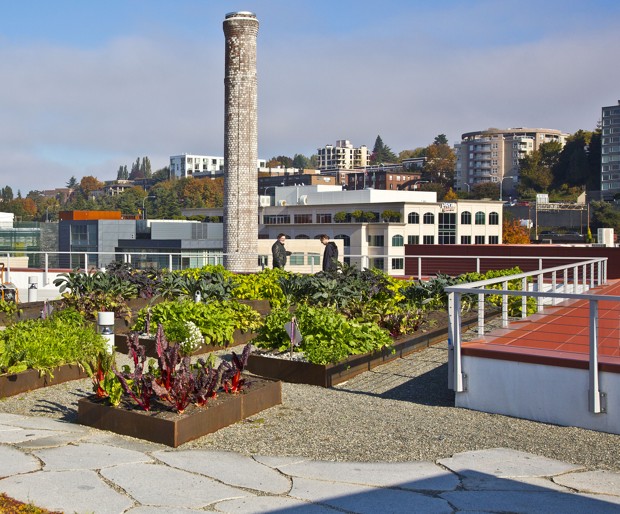 At the Stack House Apartments in Seattle’s now-trendy South Lake Union neighborhood, residents can walk out onto a terrace and pluck a tomato right off the vine.

In the South Bronx, an 8,000-square-foot hydroponic greenhouse atop an affordable housing development is creating jobs and food for the residents below—along with cooler summers and warmer winters.

And in Somerville, Massachusetts, Assembly Row, a still-under-construction mixed-use development, features a small garden that serves several local restaurants and is a learning site for area employees.

Environmentally conscious construction and building systems are old news at this point, but building-integrated food production is a relatively new, though growing, area of focus. And it’s led to a bit of a strange bedfellows situation: As both urban agriculture and real estate boom in a number of U.S. cities, real estate developers are looking to small-scale local growers to augment their plans. At the same time, food activists are beginning to recognize how even luxury builders can advance their cause.

Henry Gordon-Smith, who advises schools, builders and cities as they roll out vertical farming projects, says he now receives up to 10 calls a week from builders and architects inquiring about such technologies or, increasingly, seeking experienced growers.

“The building has to be productive,” he says. “All of that creates better occupants, and better citizens. Food is the next frontier in this.”

Instead of seeing Boston’s building boom as a threat to her urban farming business, Jessie Banhazl, founder and CEO of the Somerville-based Green City Growers, looks at new development as a positive. She started out installing terra firma gardens in backyards and public spaces, but says much of her work of late has been meeting with major developers and architects to build rooftop and grade-level farms into their plans from the conception stage.

“It’s really important that developers understand the value of this, and that they can provide amenities and lots of value to their property by having a rooftop farm,” she says. “There’s so many different applications where the tenants would value having food growing on the property.”

Indeed, many of these developments view urban agriculture as an added amenity for tenants, similar to a gym or a media lounge. As a perk for tenants like Google and Akamai, commercial property management company Boston Properties asked Green City Growers to initiate a garden and education program at its Kendall Center building in Cambridge. Another firm, Beacon Capital Partners, collaborated with a local beekeeper to put beehives in a number of its Boston buildings, which allows building managers to bring little jars of honey to their tenants, providing a “rare opportunity for a landlord to come by when they don’t need something,” says Noah Wilson-Rich of Best Bees.

Across the country in Seattle, the same is true for a number of newer residential developments. Vulcan Real Estate, run by Microsoft co-founder Paul Allen, has included rooftop community gardens in many of its recent projects. At the 24-story Martin apartment building downtown, residents chose to tend their rooftop gardens themselves, while the terrace garden at the Stack House Apartments in South Lake Union is maintained by Colin McCrate and a team of farmers from Seattle Urban Farm Company. McCrate and Vulcan are now working together on another, larger residential development, and they say gardens appeal to a younger generation of Seattleites who carry with them “a more holistic environmentalism.”

“Typically, the land that is slated for housing, agriculture is not going to be competing with that land. Period. The end.”

“A lot of our residents wished that they had some green space to tend rather than just a shoebox in the window,” says Brandon Morgan, development manager at Vulcan. “It’s also a visual amenity, as part of our landscaping, it’s sort of a centerpiece on that roof deck. And it also encourages healthy living by basically providing residents with greens, if they want it, for consumption.”

Food activists are starting to see the long-term benefits of integrating agriculture into existing or new infrastructure, says Holly Fowler of Northbound Ventures, who facilitated the yearlong urban agriculture visioning process on behalf of the City of Boston that ended this summer. “Typically, the land that is slated for housing,” she says, “agriculture is not going to be competing with that land. Period. The end.” When conversation at meetings turned to combining development and agriculture, Holly says, “reactions were always, ‘we should do more of this.’”

This is not to say concerns do not exist among the urban food justice crowd. Chief among them is the fear that access to an urban garden is an amenity available only to those who can afford it, says Andrea Dwyer, executive director of Seattle Tilth, a large nonprofit with a variety of urban agriculture projects throughout the city. And after the initial luster of that new bed of veggies at the apartment complex or office wears off, she adds, what will become of the project then?

“I do worry that some of these trendier developments, that while it’s a fad, people will incorporate it, but it will fade and they’ll do the equivalent of asphalting over it and turn it into something else,” she says. “In order for urban food production to have staying power, there has to be a real commitment and dedication to it from all perspectives—from people who are developing the buildings, the planning departments, the politicians.”