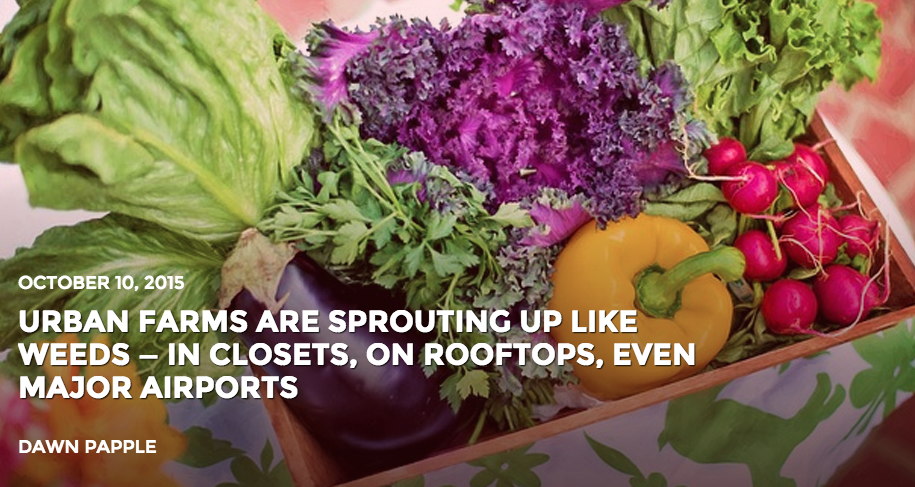 If your town isn’t on board with urban gardens, they are living in the past, because urban gardens are sprouting up all over the nation as people search for more sustainability and more control over what they put in their mouths.

Farmland is scarce and costly, according to WGBH News, which featured an article on urban farms. Courtney Hennessy and John Stoddard were two urban farmers interviewed for the article. Instead of plowing the fields, they tend produce on a rooftop in Boston.

“We literally biked around looking at big buildings,” Hennessy, owner of Higher Ground Farm, said while harvesting arugala on the roof above the Boston Design Center in the Seaport District to sell to restaurants. Their rooftop farm is so new it’s only breaking even right now, so the couple kept their other jobs. Both Hennessy and Stoddard believe that urban farming businesses have no where to go but up, because growing city populations are increasingly wanting to know where their food comes from.

“There’s a lot of really amazing urban agriculture going on in this country, but all of it’s through nonprofits and grant funding,” Hennessy explained. “And we’re determined to see if we can do this as a for-profit company. Can you live and work in a city and still be a farmer, I guess, would be the thing we’re trying to figure out.”

Catherine Bertini, a former executive director of the United Nation’s World Food Programme, says that she doesn’t believe that urban farms will have a very big impact on the food stem.

“I’d like to be proven wrong, but it’s not going to change the world because it’s the big-volume farms that can do that,” Bertini said. “And until these small projects become very large, they’re not going to have a big impact.”

It’s not just rooftops, urban farmers are using their front yards, their back yards, and even their closets to grow food in. Grove Labs is a startup company that is encouraging people to grow their own produce from cabinets right inside their homes. Jamie Byron and Gabe Blanchet, MIT graduates, started Grove Labs and fully believe that home-grown food is the wave of the future.

“In the future we see people being able to grow lots of things in their home and maybe have an entire room that’s dedicated to growing,” Byron said.

“The reality with a new technology like this is we want to make sure it’s beautiful and works really well,” Blanchet said of the indoor mini-farms. They’re a few thousand dollars, but the pair is committed to changing the way food is brought to the table. “And so the price point isn’t — we didn’t just go for the bare minimum we could scrape by with. So for those who are really price sensitive, we plan to release do-it-yourself plants so people can build their own ecosystem.”

Byron and Blanchet’s opinion on the food demands of the future are contrary to Catherine Bertini’s opinion. The MIT graduates believe that the newer generation of adults don’t want to repeat the mistakes of past generations.

The newer generations, Byron and Blanchet say, will want to stay connected to their food sources.

“Besides providing a green space for customers and crew members, it will help us become even more sustainable,” Brian Holtman, JetBlue’s manager of concession programs, explained. Food scraps from the restaurants there will become compost for the urban farm. Meanwhile, a rotunda garden at Chicago’s O’Hare International Airport supplies nearby restaurants with beans, peppers, leafy greens, and herbs from 26 aeroponic growing towers. O’Hare has even utilized landscaping goats, sheep, llamas, and burros to clear “dense scrub vegetation,” according to a Take Part article.

Whether the agriculture leaders of the country want to believe it or not, a farming revolution is happening. Urban farms are found everywhere from high rise buildings to street dividers. Many urban farmers are using vertical farming techniques. After all, for decades, we’ve heard threats that there isn’t enough farmland to feed the nation, so innovative sustainable folks went vertical instead. The new designs allow for larger yields and better control over crops. Traditional farming ends up with a 50-50 risk of crop loss, according to Food World News.

Not only do urban farms let people feel good about what they are eating, urban farms’ green benefits also reduce the number of delivery trucks, cuts back on fuel needs, and promote cleaner air. Besides, with urban farming, food can go from farm to table in less than a day. Food from urban farms maintain their fresh-picked taste, because they’re actually fresh, not artificially ripened or preserved.