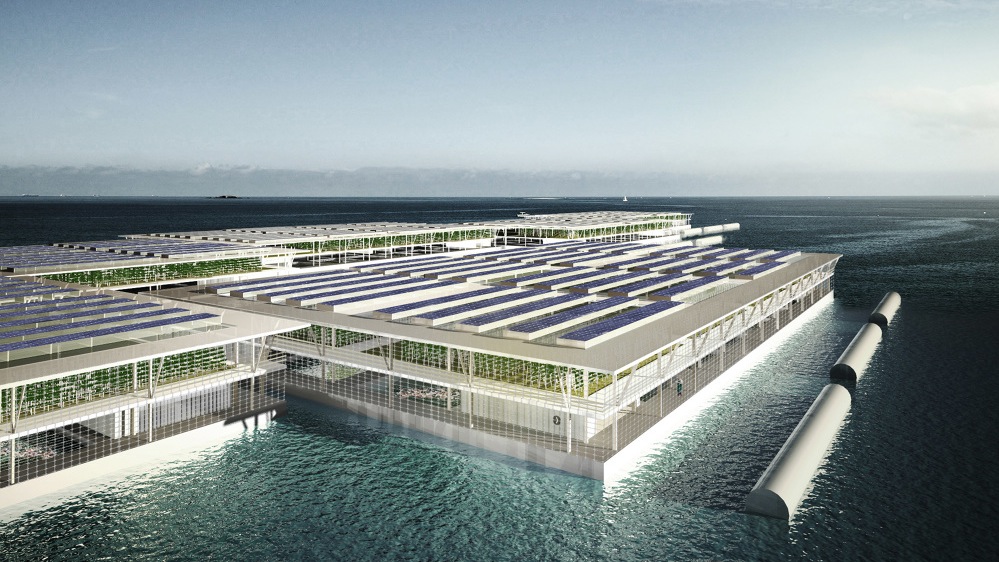 With the world’s population expected to hit 9.1 billion by 2050, coupled with the growing effects of climate change on our ability to grow crops, a company out of Barcelona has proposed a solution to feeding the future world. Forward Thinking Architecture’s triple-decker Smart Floating Farms would feature 2.2 million square feet (2.04 sq km) of fish farm, hydroponic garden, and rooftop solar panels to power a floating barge, which could be anchored to the beds of oceans, lakes or rivers. The company estimates that each of its floating farms could produce about 8 tons (7.3 tonnes) of vegetables and 1.7 tons (1.5 tonnes) of fish per year.

The floating farms are intended to provide a solution that can keep up with food production levels that will have to increase by 70 percent globally, and 100 percent in developing nations, to feed more than 9 billion mouths. With so many people, arable land would be stretched to its growing capacity (we’re currently using 80 percent), while fresh water supplies would be severely stressed. Oceans are also being overfished at present.

The company’s idea to move farms onto the surface of water would address all those issues. Each level of the triple-decker farm would have its own function, and would operate as part of a sustainable loop that feeds into the other decks.

Skylights and solar panels on the top deck would convert sunlight into energy to power the farm. The middle level would consist of tiers of hydroponic organic crops that would maximize the limited space on the barge. Waste water from the crops would filter down to the fish farm level at the bottom as a food source. 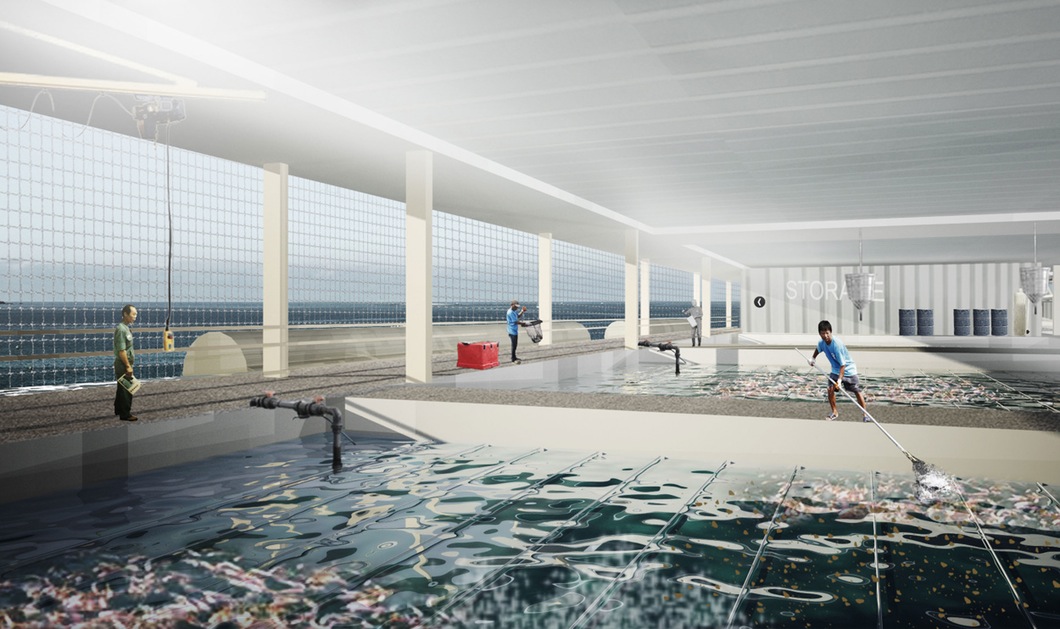 Meanwhile, the nitrogen-rich fish poop would be recycled back to fertilize the crops. Unlike livestock animal manure, fish manure is a fast-acting fertilizer that doesn’t take months to break down, and would provide the plants a quick nutrient boost, including the macronutrients phosphorous and potassium. Fish farming combined with hydroponics – a combo known as aquaponics – is a proven system that is growing in popularity, so this part of the concept is perfectly reasonable.

Also added to the barge would be a possible desalination plant (if floating on sea water), a fish-processing house, and a packaging facility. Wind turbines and wave turbines could also be added, to provide extra energy. The entire barge would be protected from the seas and bad weather with inflatable wave protectors. Thus the farm would be self-sufficient and largely self-operating, requiring minimal labor.

Javier Ponce, the CEO of Forward Thinking Architecture, envisions locating the floating farms, which would be scalable, near densely-populated cities which will see the greatest growth in the future. Of the 35 megacities with more than 10 million people, 25 are located near water, such as Shanghai, Jakarta, Lagos, Tokyo and New York. Ponce believes the floating farms could complement existing traditional agriculture systems, helping reduce food risks associated with climate change issues in especially vulnerable parts of the world.