Not only are people around the world capable of growing nutrient-dense, nourishing food that will feed their communities, even if they live in an urban setting, but they can also do it with élan. Some of the most creative urban gardening projects around the globe can inspire us to create our own green space in the city, or add luster to a space that’s already underway which just needs a little oomph. Here are some off-the-(biotech)-chain gardens that will get our creative juices flowing so that we can carry the dream of living pesticide and GMO-free, further: 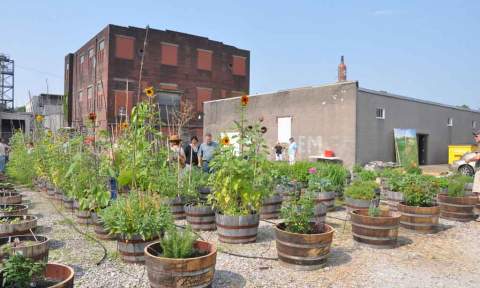 Everyone who has kept abreast of national news has heard of the urban blight that has devastated Detroit. This once burgeoning center of the auto-trade in America is now a sprawling concrete wasteland – or is it? Food Field is an urban farm in the middle of central Detroit. It grows heaping amounts of organic produce using permaculture. They even raise chickens and ducks, grow food utilizing aquaculture, raise honey bees, and have their own organic fruit orchard. This all happens on a piece of land that is smaller than that of many McMansions. Even in one of this country’s most economically depressed cities, where unemployment rates are currently swollen to 14-17 percent, people are flourishing growing their own organic food.

Detroit isn’t the only city under economic duress, but this doesn’t sway the Distributed Urban Farming Initiative or DUfi in downtown Bryan, Texas from mixing sound agricultural practices with community building.  They want to spread their plan for city gardens everywhere:

“Our distributed urban farm program aims to resolve the weaknesses of other programs by engaging small businesses as key partners in the downtown farm. It is our intent to develop, implement and promote a sustainable downtown business model that will be available to communities that would otherwise lack the means or direction to execute urban farming.”

The city of Bryan works with the initiative to grant vacant or unused plots around downtown to be used to grow organic gardens. They also plan to provide some of the produce grown to local restaurants to make dining out healthier too.

If you think an urban garden is relegated to just growing vegetables and herbs, think again. People are successfully raising chickens in chicken coops in urban and suburban areas all over the country – and aside from providing nutrient-dense eggs, with sun-yellow yolks like you’ve never seen in a grocery store, these birds also create great compost to amend organic garden soil.

It seems we can do a lot with a little ingenuity.

One supermarket in Brooklyn, New York has decided to get in on the action, and now has an entirely organic rooftop garden. It was constructed via a partnership with Gotham Greens, a Greenpoint-based rooftop farm, and you can’t get more local than five miles from your borough! They produce tons of organic produce all year long and don’t use a single pesticide. I’m sure this miffs Monsanto, Bayer, and Syngenta signifcantly, but you can’t stop Americans who know the truth about GMOs and pesticides.

With creative farming initiatives like the ones Sky Greens offers, fewer fruits and vegetables would need to be imported, and people could enjoy more locally sourced food that isn’t controlled by biotech monopolies. According to these innovative farmers, “the production yield of Sky Greens Farm is 5 to 10 times more per unit area compared to other traditional farms growing leafy vegetables using conventional methods in Singapore.” They also offer year-round production and are not subject to climate events like drought or tsunamis.

Finally, an organization in New Zealand, Canada and the US offers a supremely novel idea for helping people grow food who simply don’t have the land to grow it on. They are called Sharing Backyards. Taking advantage of the fact that many urban and suburban areas have lawns, yards, and empty spaces which people aren’t utilizing to grow food, but could be, individuals can logon to their site and either put in a request for space to garden, or offer land that currently sits idle. Not only does this idea help people who are often the most marginalized have better access to healthy food, but it teaches us to rely on each other instead of huge corporate conglomerates that don’t care about feeding the world, only poisoning the planet for profit.

If you have a creative idea about taking the food supply and redirecting it in a more sustainable direction, please share it with us at Nation of Change.