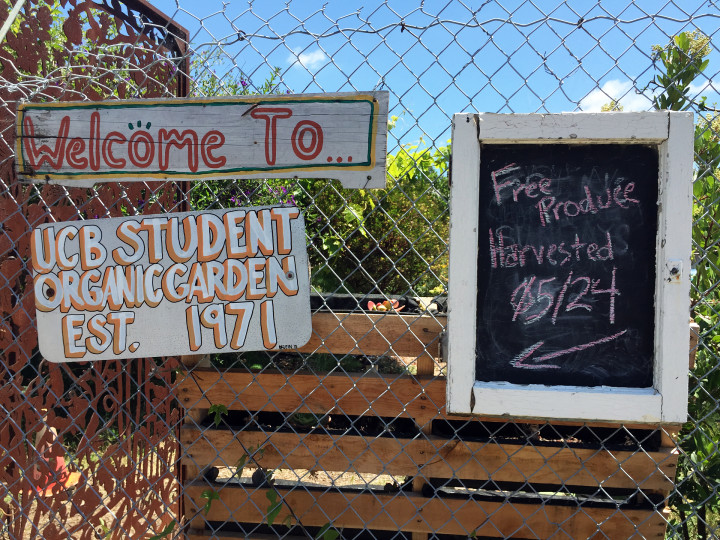 A sign outside the garden tells when there’s produce being given away. Photo: Alix Wall

Whenever UC Berkeley student Sara Cate Jones has felt the blues coming on, she’s relied on the same remedy: she goes to the student garden on the corner of Walnut and Virginia streets and picks herself a bouquet of flowers.

“The garden is always here for you,” said Kate Kaplan.

Established in 1971 by a group of students shortly after the first Earth Day, the garden has offered students and the community at large an urban oasis in North Berkeley for over 40 years.

About a quarter acre in size, the garden sits on a plot of university-owned land and is overseen by SOGA’s student volunteers. SOGA was founded in 1999 when the university gave the garden space to EBMUD for a pumping station. The students protested and a compromise was reached; the pumping station is now adjacent to the garden. 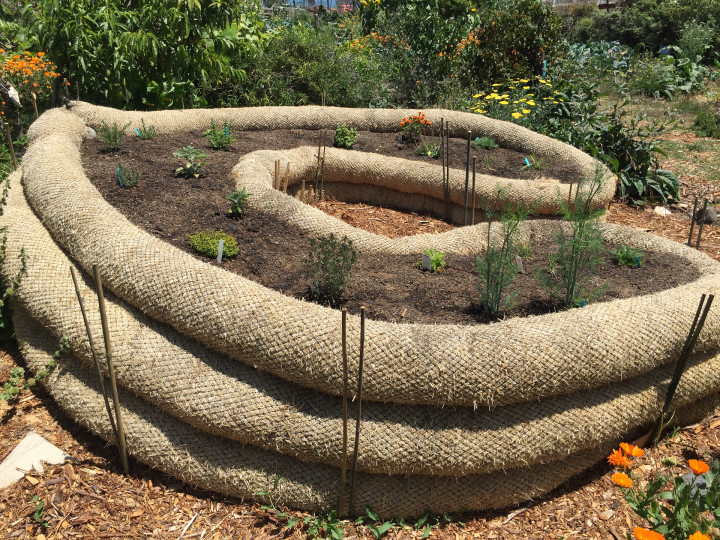 This keyhole raised bed, in which herbs are growing, is made out of straw wattles. It was a student project to experiment with cheaper solutions than planter boxes to grow above ground. Photo: Alix Wall

As for what’s planted, it’s entirely up to the students. There are several varieties of apple, plum and fig trees, flowering plants and bushes like sunflowers and lavatera, succulents and native plants, and of course, plenty of vegetables.

Though the garden gets some funding from student fees, SOGA is responsible for applying for grants to keep the garden running, and is also “meant to be the stewards of the garden, to make sure something like that doesn’t happen again,” said Kaplan. “We also make sure relations are good with the administration, and make sure they know what’s going on,” said Jones.

(For example, at one time students brought in chickens and goats without university approval – they are not allowed to raise animals.)

Kaplan emphasized that the garden gives students a chance to connect to a more nontraditional education, which “allows them to build off the lecture-based education we receive and get their hands in the dirt with hands-on experience.”

Several classes are held inside the garden. Organic Gardening and Food Justice is one and Garden Leaders is another, which “teaches students how to do project management within the context of a garden,” said Jones, while showing off several projects that were conceived of and brought to fruition by students recently. One such project was a greenhouse made entirely of reclaimed wood and glass.

Then there’s also what’s known as BUGI, or Berkeley Urban Gardening Internship, which connects students with other urban gardens in Berkeley and teaches students how to manage a garden. 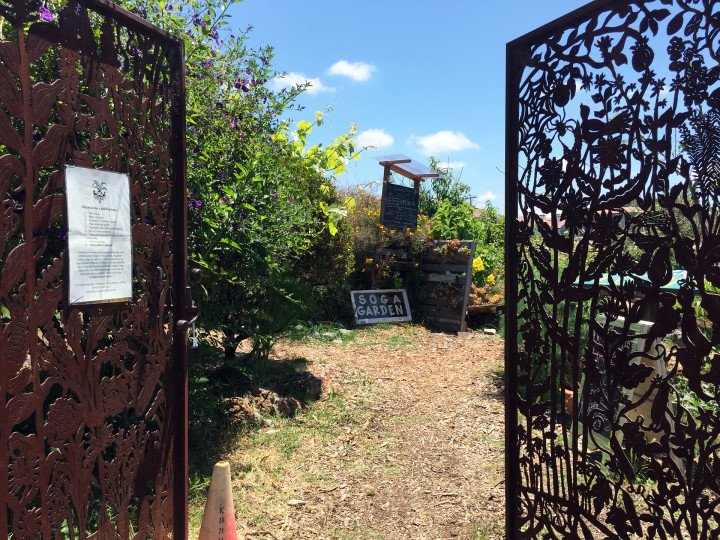 The entrance to the garden is on the corner of Walnut and Virginia Streets in North Berkeley. Photo: Alix Wall

And while those who take care of the garden tend to have more than a passing interest in environmentalism, those who take classes in it run the gamut of the entire campus.

In a class of 150 students this spring, their majors were “all over the map,” said Kaplan. “They had majors like math, business, French, everything.”

While only organic practices are used in the SOGA garden, the piece of land next door, called the Oxford Tract, is used by professors for their various research projects and the students worry about non-organic pesticides drifting over the fence.

One of the allies of the garden, Agroecology Professor Miguel Altieri, often tries to rent the space closest to the garden where he too gardens organically, but the students can’t control what happens on the other side of the fence.

While they sometimes put a sign outside offering the latest harvest to passersby, they don’t have a regular food giveaway because their output isn’t that regular. 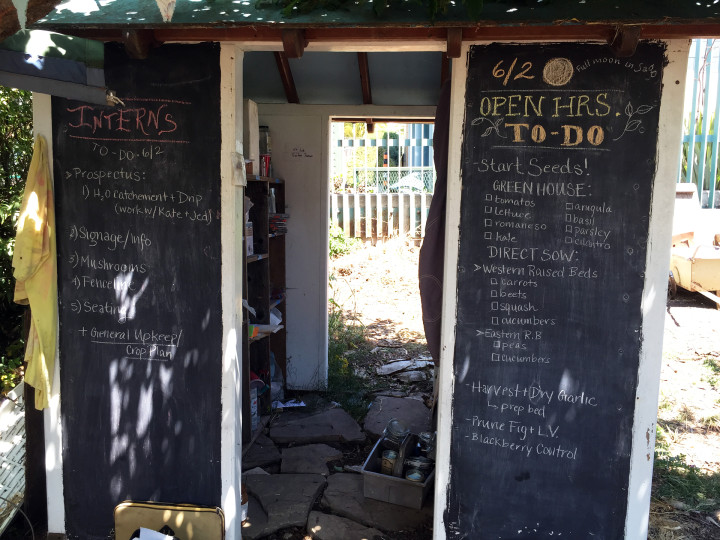 Several summer interns are getting paid to help oversee the garden while the students are away on summer break. Here they keep track of their to-do list. Photo: Alix Wall

“Last year we partnered with the UC Berkeley Food Pantry, providing fresh produce for them to give away,” said Kaplan, noting that their grant money only provided the pantry with non-perishables.

The students often take the produce to share with their roommates, and community members are welcome to drop by when the garden is open, to see if anything has been freshly harvested. (During my visit, one woman dropped by to ask advice about why her apple tree wasn’t fruiting, and another man came by to see if he could score some kale or chard leaves.)

However, many longtime neighbors barely know the garden is there.

“Most neighbors who come in are super excited to see it,” said Kaplan. “Most say they have to come by more often.”

While the students have led some programming for local schoolchildren, and offer workshops through Berkeley Unified School District, they admit that because of a lack of continuity in management, sometimes they aren’t the best at marketing what they have to offer.

“We’re trying to expand beyond the campus community,” said Kaplan. “Many people think it’s just for students, but we’re trying to break that barrier. The garden was started by students and is mostly run by students, but it’s open to everyone. We never turn away anyone if they want food or just want to walk around.” 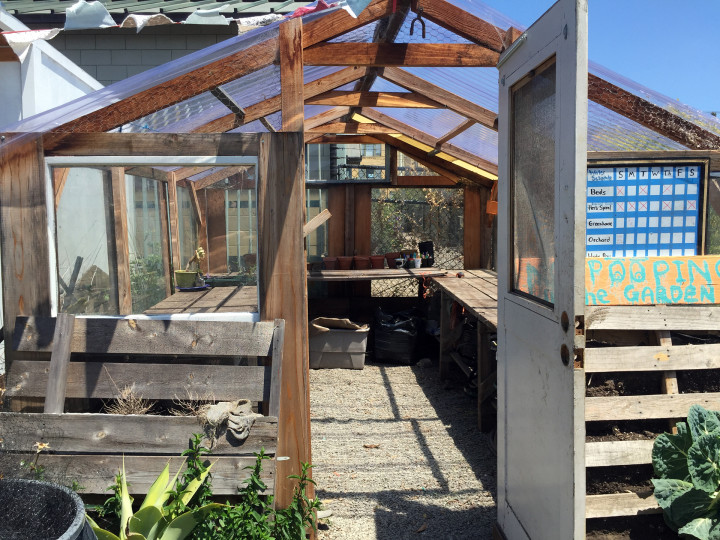 This green house, made of reclaimed wood and glass, was completely student implemented and built. Photo: Alix Wall

Many students are also not aware of the garden’s existence.

“It does seem kind of hidden,” said Jones. “My favorite part of it is its ability to teach students. But it’s also such a great place to create community, especially in a university that can be so competitive, and that is so big, that students can get lost in it. It provides a kind of safe haven for us.”