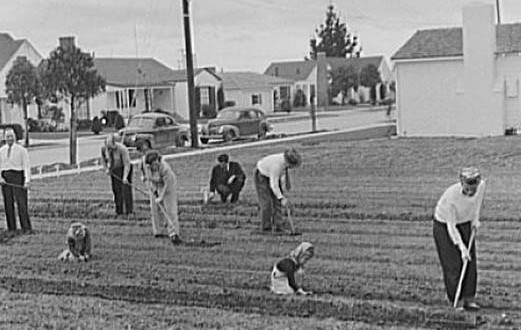 The war gardens of WWI (1914-1918) and victory gardens of WWII (1941-1945) were government initiatives requesting civilians to become “soldiers of the soil” and grow their own fruits and vegetables. European and American farmers were enlisted in the military leaving a void in homeland food production labor. Also transport of food supply across the country or abroad was too costly. Growing one’s own food to support the war effort was deemed as a way to boost morale during a stressful time for families.

In the U.S., millions of rural, urban, and suburban residents turned parks, vacant lots, backyards, rooftops, and schoolyards into food gardens. Government booklets were distributed to citizens detailing how to grow a victory garden with diagrams of four essential kinds of home gardens with square footage and rows of crops—farm, subsistence, backyard or vacant lot, and kitchen garden. First Lady Eleanor Roosevelt oversaw a Victory Garden on the front lawn of the White House.

Since school gardens were commonplace in the United States as far back as 1890, especially in large cities like New York, Philadelphia, and Chicago, the U.S. Bureau of Education enlisted 2.5 million schoolchildren into the U.S. School Garden Army in WWI, producing 48 million dollars worth of wartime food. In WWII, 18- 20 million family and community victory gardens produced 40 percent of the vegetables in the U.S.