Some people are happy with a patio tomato on the porch.

Willie Anderson, 82, took container gardening to another level; he planted tomatoes, cucumbers, corn, okra, squash, peppers and eggplants in five-gallon plastic buckets in his yard in Red Banks, Mississippi. He now has plants in more than 1,000 buckets. 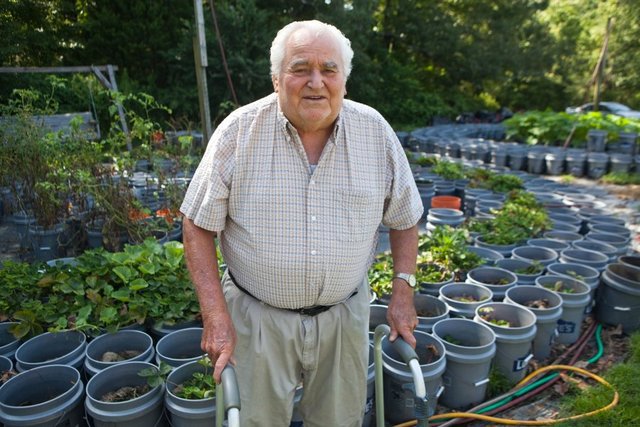 Willie Anderson, 82, maintains a garden of 1,000 fruit and vegetable plants in buckets at his home in Red Banks, Miss. The garden requires no special equipment. There’s no hoe on the place, he said. And it’s totally organic. I use grass clippings, soybean stalks, cotton hulls, he said.

It’s easier to grow an entire garden if you’re planting everything in buckets, Anderson said. “There’s no hoe on the place,” he said. “We don’t need one.”

The garden is totally organic. “I use grass clippings, soybean stalks, cotton hulls — that’s the waste that comes out when they gin the cotton,” Willie said.

Ron came up with the idea of the bucket garden for his dad nine years ago. Willie always was a robust man, he said. He was in farming, raised hogs and cattle and went into the home building business with Ron and his other son, Mark Anderson. “He had a hip that deteriorated and he had to have hip surgery and replacement,” Ron said of his father. “When he had that, he was pretty much home bound and his hopes and dreams were just going down. He had cabin fever. He didn’t have anything to look forward to or to do. He couldn’t get out like he had all his life.”

Willie liked the idea of the bucket garden. “I was just tired of sitting up in the house,” he said.

Ron bought 100 buckets from Lowe’s and some Miracle-Gro potting soil. He said, “Dad, let’s try this and see if we can do this for your hobby.”

Willie didn’t want to stay in the house anymore. “We got him a little four-wheel scooter and he’s out the first thing every morning to check his garden,” Ron said.

“You can garden in the shade,” Willie said. “It needs to get at least five hours of sunshine a day. That’s enough for the plants.”

Their first harvest was better than they expected. “We probably had about 10 cases of tomatoes that weighed 30 pounds apiece,” Ron said. “I sold them to some pizza companies in the Olive Branch area. They froze them and canned them for soups.”

Now they mostly give away the produce they don’t use. “I thought at first there might be a little money to be made in it,” Willie said. “But I don’t think there is. I just give what I grow to whoever wants it.”

They stopped using Miracle-Gro after the first year and went organic. “We don’t use any kind of chemical fertilizer and we use the same dirt year after year,” Ron said. “We plant them in the same pots every year. After people cut their grass and sack the grass cuttings on the side of the curb, my brother and myself go around with a trailer and bring home 20 to 30 sacks. He puts it around the top of the buckets. The grass fertilizes every time you water.”

To irrigate, they attach water hoses to sprinklers atop 10-foot landscape timber posts, which are stuck in the ground. They use one sprinkler per each group of 350 buckets. “All I do is turn the faucet on,” Willie said. “It wets everything down in about an hour and a half. It usually lasts about a week if it’s not too dry.”

They haven’t tried everything. “We haven’t grown any field peas, but they’re so simple to grow,” Willie said. “I don’t see a problem with them.”

Plastic buckets aren’t the only container gardeners can use, Willie said. “These gardens can be grown in a plastic shopping sack like you get at the grocery store if you want to, but they’ll only last one year and you’ll have to redo it every year,” he said. “I have done it. It’ll work. But the plastic will rot out by the end of the year.”

Ron, his mother, Geneva, his wife, Gidget, the grandchildren and a hired man help with the garden. Willie basically oversees the garden.

Willie also gives the plants pep talks. “I say, ‘Now, y’all got to do better than that,’” he said.

“He does go down there and talk to them three times a day,” Ron said.

Garden writer Felder Rushing, a former Extension Service urban horticulture specialist, is a fan of bucket gardening. “I have grown veggies and herbs in five-gallon buckets in my Mississippi garden for years,” he said. “So cool. So easy. Just the right size. Can’t grow a decent tomato or pepper in anything smaller. And no worries about soil diseases.”

Rushing doesn’t stick with drab-colored buckets. “I spray paint mine to make them more cheery.”

As for Willie’s 1,000-plus bucket garden, Rushing said, “I totally agree with the sentiments of Mae West, who once said too much of a good thing is — wonderful.”