I have always enjoyed cooking and baking despite being a picky eater when I was growing up. I’m not sure where my love of making food comes from because I don’t have any specific memories of anything growing up. For the most part my family was on a pretty typical processed food diet. Lots of meals came from packages, boxes and mixes.

You can’t blame my parents for that because I’m sure it was tough for them to raise three kids (with me being the youngest and obviously smartest) all while going through pretty rough financial times. They were doing their best.

Fast forward to 2006. At that time I was living in Philadelphia on my own. Since my teenage years, I had suffered from pains in my feet and ankles. Pretty much any doctor that I went to during my life wanted to either give me meds to dull the pain or have me fitted for expensive orthotics.

I was never one into taking pills and wasn’t able to afford orthotics. The pain in my feet and ankles got to be so bad that I was unable to walk barefoot in my apartment. It just hurt too much. It wasn’t excruciating pain, but very uncomfortable.

My parents convinced me to see the doctor again to find out if there were any long terms effects that I should be aware of. He had me diagnosed with plantar fasciitis, tarsal tunnel syndrome (carpal tunnel of the ankles) and arthritis. All of this at the age of 27.

His solution was to start taking pills. I refused.

There were some stretches that he recommended, and he referred me to a sports medicine specialist. The specialist pretty much told me the same thing. Thought he encourage me to buy some other stretching devices and Forest Gump type boots to sleep in. He then referred me to a physical therapist.

After going to physical therapy twice a week for four weeks, I didn’t feel any better. The foot massages that she would give me on the bottom of my feet were ridiculously painful. My post workout routines weren’t getting any better as I’d have to ice my feet and ankles down for at least 30 minutes to help with the discomfort.

Inspiration from an unlikely source

Being a New Yorker and having a brother who is nine-years older than me, I was fortunate enough to be raised on The Howard Stern Show. Yes, I am saying that Howard Stern is what helped to cure me of my pain.

Check it – In his book Private Parts, he talks about the severe back pains that he used to have and how he helped to cure them. Stern was able to do this through the teachings of Dr. John Sarno who had a book published called The Divided Mind.

I thought, “why not give this a try?” Buying a book was certainly cheaper than the other crap that I had purchased, and what I was currently doing wasn’t working. I was open to other options.

I ordered the book and began reading it. I’m not going to lie and say that it immediately transformed my life. The book reads kind of like science textbook (read: boring), but for some reason I kept reading it.

Over the course of a few weeks, I had completed the book. The concepts made sense and was thinking of going to a doctor that practiced Sarno’s method of healing pain. For some reason, one night when I was driving home from my kickboxing training, it all clicked.

I started to have internal dialogue with myself about my life, growing up, relationships with friends and family…and within the next few days the pain was gone. I shit you not – 12+ years of pain was gone just like that and has ceased to return.

On the sub-conscious level, our body deprives a certain part of body blood, which results in a physical pain instead of focusing on the emotional pain. The pain actually exists, but the cause of it is not a structural thing. It’s an emotional thing. For me it showed up in my feet. Other common places for it to show up are in people’s necks and backs.
As I acknowledged to myself what was going on on a deeper level, and brought those feelings and emotions to a conscious level, the pain went away.

It sounds crazy, but it worked for me, so I’m a believer.

It’s easier for someone to take a pill or get surgery than it is to look at themselves in the mirror and see what’s truly going on.

Ok, what’s that have to do with food?

This has everything to do with food because it’s what got me thinking differently about how we go about our lives. We are taught to seek doctors and pills to alleviate our problems, but all they do is mask them.

Later on in that year I went back to the doctor again. I was getting sick a lot. Nothing crazy just a really bad cold and flu every 2-3 months. It was unacceptable to me. At the time, I was doing what I thought was right in terms of taking care of my body and nutritional needs.

I worked out regularly, didn’t eat at fast food restaurants and prepared most of my own meals at home. I was still getting sick way too frequently.

Again the doctor just wanted to give me pills, and again I refused.

Yup The King of All Media again was there for me with an answer. It just so happened that around the time I was looking for reasons that I was getting sick so much, Stern’s co-host, Robin Quivers, was doing the Master Cleanse. She was talking about it on the air, and it made sense to me.

During my lunch break I went to the bookstore and picked up a copy of the Master Cleanse (I would not suggest doing the Master Cleanse, but instead getting a health coach or doing something like the Clean Program). I read it in a few days and decided to take the plunge. I was going to start the following week just like that. That’s the kind of person I am – all in or all out.

The Master Cleanse talks about giving our body and digestive system a break, how a lot of what we eat cannot be fully digested, sits in our bodies and that’s where disease and illness breeds. Made perfect sense to me.

I was committed to the cleanse and not eating for the next 10-days. After about day 3 or 4, I felt really good and had more energy than I had in years. I thumbed through and re-read the book again. It suggested adopting a plant based diet following the 10-days. I was in. There was no transition period. I was just in.

When I started it, I had no intention of cutting out meat and dairy products, but I felt good, so why go back to feeling shitty?

That lasted about four months, then I went back to eating animal products again, felt like crap and went back to cutting them out again. I think everyone goes through that phase.

On to raw foods

After doing the Master Cleanse, I began reading more books on alternative health, food and the environment. I realized that just because I cut out animal products didn’t mean I was eating more healthy. There was still lots of sugar, soy and processed foods to be eaten.

About a year after doing the Master Cleanse, I learned and began reading more about the raw food lifestyle. This appealed to me and made sense. I always did these things because they made sense, not because of some bullshit study.

Much like the Master Cleanse, I jumped right into the raw food thing. I bought a Vita-Mix, juicer and dehydrator. I was loving it.

During the time when I was heavily into the raw food lifestyle, I moved back to New York and into the raw food mecca of the world – the East Village. There were at least 5 raw friendly restaurants within walking distance from my apartment. It was great.

I still kept on reading books about health, food and the environment such as Fast Food Nation and The Way We Eat: Why Our Food Choices Matter. These books made me understand that food was a business just like anything else and the decisions we make with our food choices impact more than just our bodies.

So I might’ve been eating raw foods, but I was also eating lots of thai coconuts, mangoes, bananas and other produce that certainly wasn’t grown in NY. What were the environmental and societal impacts of them? What was I supporting?

Growing my own food and raising awareness

The book that really put my food choices into perspective for me was Plenty. It’s about a couple that journals a year of eating foods that were grown within 150-miles of where they lived. I certainly wasn’t going to attempt to do that, but though that I could at least do something. Why not grow my own food?

The thing is that I had no experience and little space. I lived in New York City, I barely had living space, not to mention a place to grow my own food, but I was able to turn my 2×3 fire escape into a full on organic vegetable garden.

Since I started to grow my own food and this site, I have been continually learning and reading more about what’s going on with our food system and how it relates to health.

Here’s the thing to me – we are all different, but the one thing that most of us share is the kinds of food we eat. I look around and see obesity, cancer, diabetes and other illness. Something is surely wrong and I don’t believe the answer comes in a prescription.

It’s not about being a vegan or being an omnivore. It’s about eating real food. Not food that’s been sprayed with chemicals and animals that are jacked up on hormones. That’s the bigger issue.

This is why I use this platform and social media to continually raise awareness about our food and encourage people to start growing some of their own and reconnect with their food source by getting it from trusted local sources. I give people simple reasons why to grow their own food and show them how it can be done. I am not a gardener that shows people how to prune their roses and design pretty landscapes. I inspire people to grow their own food.

I always say that I don’t want to preach to the choir. The people that I like to speak with are the uninitiated. The ones that know they want to change, but are unsure of how, why or what to do. Sitting around the kumbaya circle and talking to each other is great, but change won’t come about that way.

As individuals, we have the power to make a difference with our actions. I want to raise awareness and show people that we can make a difference. Our actions and how we decide to spend or not spend our money will bring about the true change that we all want to see. Doing this through gardening and food is a great place to start. After all we are humans and growing food is what we do.

43 Comments so far. Feel free to join this conversation. 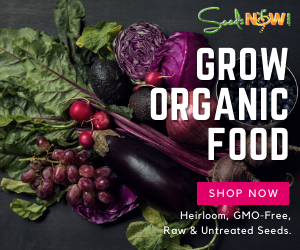