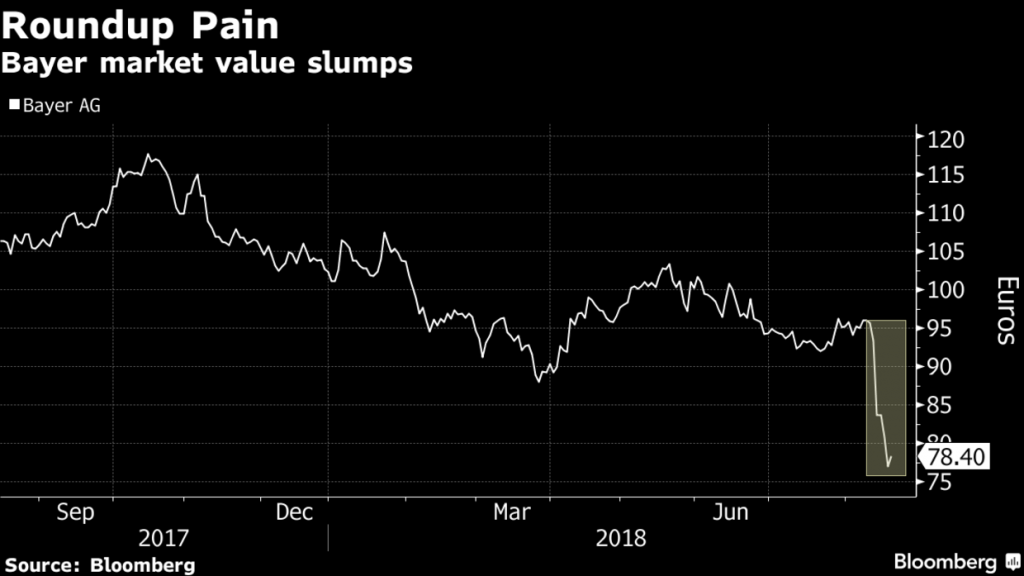 “Some Bayer AG investors were surprised to learn about the thousands of farmers lining up before U.S. courts to argue that Roundup — the blockbuster weedkiller the German company recently acquired when it bought Monsanto Co. — had given them cancer. But Roundup is hardly the only chemical in Monsanto’s portfolio carrying legal risks.

There are also lawsuits aplenty for dicamba, its next best-selling herbicide, which U.S. farmers are spraying on about 50 million acres of soybean and cotton crops this summer to combat weeds that have become resistant to Roundup.

Dicamba has a tendency to vaporize after being sprayed and drift onto neighboring fields, harming crops and other plants that aren’t genetically modified to withstand its effects. More than 1 million soybean acres are claimed to have been damaged this year as of mid-July, and last summer, that number was more than 3 million.

Monsanto and other crop-chemicals companies have come up with formulations that they say will stay put when applied correctly. St. Louis-based Monsanto pins the crop damage on incorrect application by farmers, and that’s going away with increased training. The company has received only a third of the complaints about an off-target movement that it did last year, while acres have more than doubled, said Scott Partridge, vice president at Monsanto. Moreover, 12 states last year saw record soybean yields.”

READ THE FULL STORY AT: “Bloomberg.com“